Kicking off the Christmas 2015 season 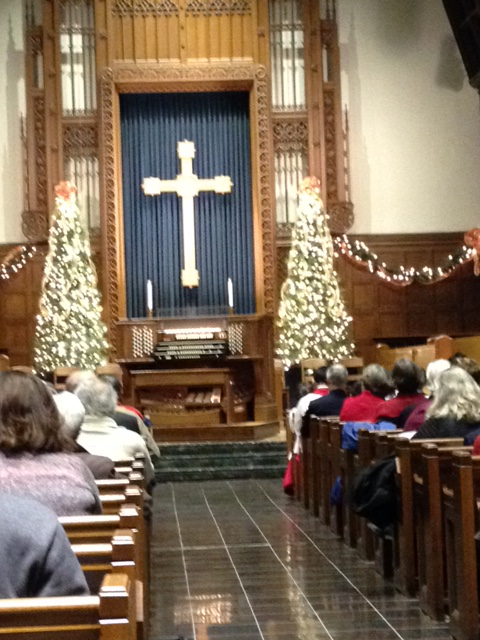 The first weekend in December has become one of my favorite weekends of the year. On the Friday of this weekend, Ted and I have made it a tradition to attend The Organist’s Christmas presented by the Ann Arbor AGO. Then on the Sunday, I attend the Lessons and Carols service at Adrian College. Some years we also squeeze in Handel’s Messiah which is usually performed this same weekend in Ann Arbor and Toledo. 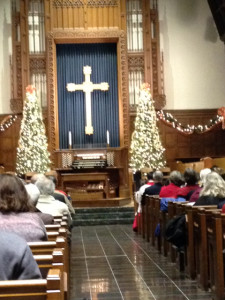 This year, the program was held at the First Presbyterian Church of Ann Arbor. Over 250 people enjoyed the program. Three organists played a few selections each. The Boy Choir of Ann Arbor sang an anthem and they also sang along with all of the hymns. The organ was front and center flanked by beautiful Christmas trees.

A Service of Lessons and Carols

I decided to go early this year after sitting next to chatty college students in the back couple of rows last year. This year I sat in row 5! I had 45 minutes to wait but it was worth it as the people seated near me were not distracting.

Before the service began the Adrian College Orchestra played several Christmas songs. At the start of the service the choir filed in for the back (while singing). The pipe organ was played along with the hymns and the Hallelujah Chorus. The organ blended well with the orchestra. I am still amazed by the power of the pipe organ. Its music was not drowned out by the orchestra.

Both concerts made for a delightful way to kick off the Christmas season!

How do you kick of the Christmas season?