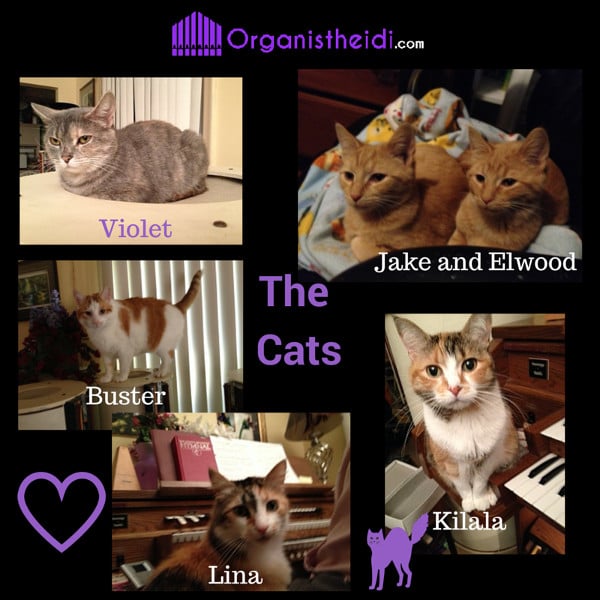 I currently have 9 indoor cats! All of them once lived life outdoors. Here is the story of how of the first 6. I have started a separate blog featuring my cats: www.thejoyofcats.com. Most of the cats will visit me when I am playing the organ or piano (not all at the same time). And, the expression pedal area of the organ is blocked off after Jake and Elwood went inside the organ when they were kittens.

Lina and Kilala came from a friend’s barn and were our first cats. They were born in February of 2003. Once they were big enough to be away from their mother we went to pick out went one and came home with two! Lina is a manx mix and was born without a tail. Kilala is that cat the visits me most frequently when I am playing the organ. Lina and Kilala were both named after anime characters from anime that we were watching at the time.

Buster was our next cat. We were not looking for another cat when he came along. On Martin Luther King Day in 2011, I had the day off from work. Either Lina or Kilala spotted Buster out the window. Lina and Kilala tended to freak out a bit (fight each other) when they saw a stray outdoors. We thought Buster was the stray we had seen for several months (or maybe years). I got up to scare him away.

It was freezing that day. When I got to the back door, much to my surprise, Buster was there and when I opened it he came in!!! He looked very much like the other stray (they were probably related). I gave him some food.. He was starving and had eye gunk too (which turned out to be a permanent condition). Buster also was ear-tipped when we found him. This means that he was likely picked up by a trap-neuter-release program and then released back where he was picked up.

I reported him as a missing cat but no one called. So we decided to keep him! He turned out to be the most loving cat we have. He loves to cuddle and has a very gentle purr. His weight quicly doubled going from 7lbs to 15lbs!

Other Buster – the feral cat 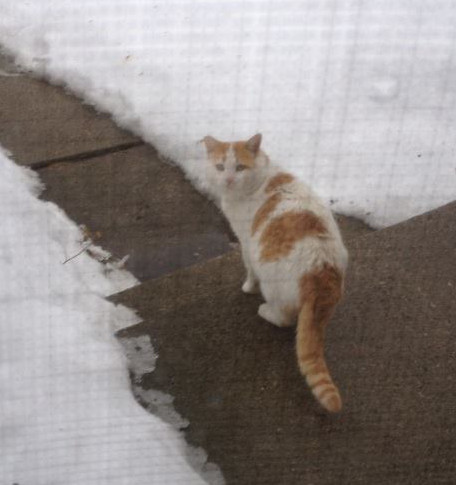 I noticed the similar looking stray looking for water in the summer of 2012. It was very hot that summer. So I started putting water out for him in the backyard. Since he looked so much like our Buster, we called him Other Buster.

He did not seem interested in becoming friends (I later learned that his meant he was feral, he was also ear tipped).

That winter we put out food for him and my husband built a cat house for the backyard. In the winter of 2013 (which was very cold and snowy), we built a makeshift structure with hay and tarp for him and any other stray cats.

The last time we saw Other Buster was 2/22/2014. I would like to believe he was either chased out of the area by another cat or was friends with other humans that took him in. But he may have met an unfortunate end.

We kept putting out cat food in case Other Buster returned. He didn’t. We saw a few other cats which we confirmed as indoor cats that came for a visit. Then there was this gray cat that starting coming each morning. She would wait down the sidewalk until she saw me leave for work. After I pulled out she ran to the food.

On my birthday, there she was in the yard by the cat house nursing 5 kittens!!!! She had two black kittens, 1 gray tiger kitty, and 2 orange tiger kittens. The kittens were not newborns but were not old enough to be away for the mom yet. We started calling her Mom Cat. Thankfully, she was a very good mother. We didn’t see her and the kittens every day.

I called our local humane society. Since the kittens were not friendly (they ran when I got close) they considered them feral and they could not take them as they only take in cats that can be adopted out. I did not want to end up with 200 cats in our neighborhood. If no one steps up that can happen (may be an exaggeration but no one helping is how an area get overrun with strays).

I started talking to them each morning when dropping off food. They got used to my voice and would come out of bushes when they heard me say “Good Morning”.

We decided that we would need to get Mom Cat fixed. The closest low-cost spay/neuter program was an hour away, but our local human society could take them (they now have a their own program!!). So I called my vet. He could give us the stray cat discount.

The only thing was the kittens needed to be weaned before she could be spayed. I also wanted to make friends with her so that I could put her in a cat carrier instead of attempting to trap her.

Making friends with Mom Cat and her kittens (ie. socialization)

To make friends with Mom Cat and her kittens I decided to start giving them wet food twice a day. This would also help to get them on a schedule making it easier to catch Mom Cat when the time came. This worked out very well. Eventually, I was able to pet her and the kittens while they were eating the food. Then some of the kittens would want to play if I sat still and didn’t try to approach them.

She would have to go back in 2 weeks to have the stitches removed. I feared not being able to regain her trust again, so we put her in the house. While she was at the vet she was tested for FLV/FIV (bad cat stuff) and was negative. We assumed her kittens would probably be negative too so we brought them inside too (It took over an hour to catch all 5 of them!).

Instead of having a feral cat colony in our neighborhood and since I had started to socialize them already we decided to find homes for the kittens (we had each one tested for FLV/FIV ). Adult cats are harder to re-home than kittens so we planned to keep Mom Cat renaming her Violet (because purple is my favorite color). My niece took the gray tiger kitty and my friend’s parent’s adopted the 2 black kittens.

We were not able to find an acceptable indoor home for the orange kittens. I didn’t want to put them back outside. A lady at work offered to have them adopted out through a shelter, but they would likely get separated. And, I had become quite attached to them by that time. We also read in some material from the vet that integrating two kittens into a household that already had adult cats was easier as the kittens would play with each other. So we kept both them, naming them Jake and Elwood! Ted choose their names from the main characters in The Blues Brothers

That’s the story! How many cats do you have?

9 thoughts on “The Cats of Organist Heidi”