On January 1, 2017 one of my dreams came true. I played the organ for a church service for the first time ever! I was the substitute organist at the First Presbyterian Church in downtown Adrian, MI. 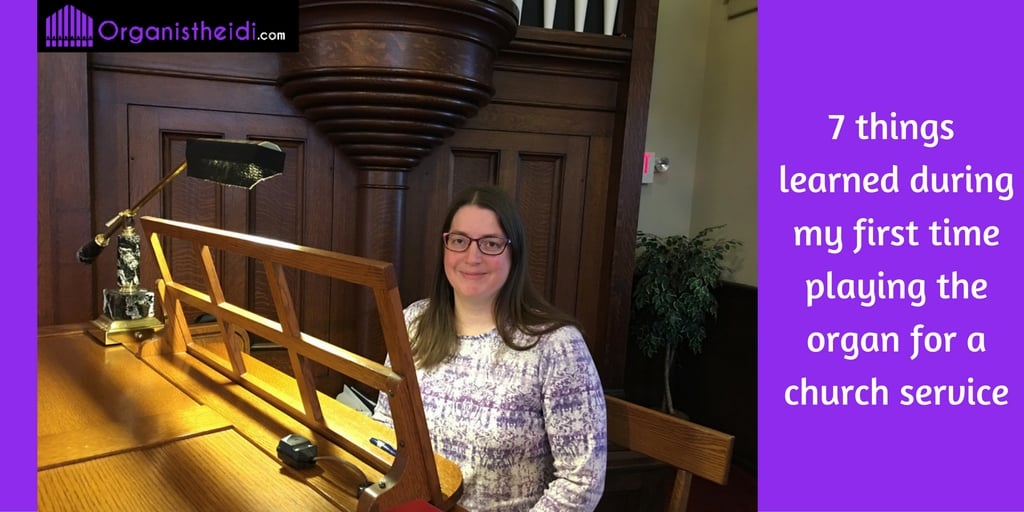 My playing was not perfect, but I managed to get through it. All pieces played during the service can be viewed from this YouTube playlist.

Here are seven things a learned throughout this experience:

1. I am able to play for a service

5 weeks ago, when I was first asked about playing for today’s service. I didn’t feel capable or ready for an audience. I tried to get out of it, but my friend was not taking “no” for an answer.

My plan was to use Michael (my teacher) as my scapegoat. I said “let me ask me teacher”. But Michael said, I will only know if I try! He didn’t say anything to discourage me. So, I reluctantly agreed to do it.

Many people had confidence in me. I was told “You will do fine” many times by people who had never heard me play a note!

I would also need to play a prelude, postlude, offering, and something quick to end the Passing the Peace of Christ. These could all be pieces that I already knew how to play. For the prelude, I played Nun bitten wir den Heiligen Geist which I had been relearning for my lessons. I choose 1 verse of Crown Him with Many Crowns for the Passing the Peace of Christ as I have this hymn memorized. The offering was Prelude and Fugue in E Minor which I have been working on for over a year.

At this point, I had 25 days to learn 5 hymns. At my regular practice pace, it takes me 2 or 3 months to learn a hymn, and sometimes more than a year to get them right! I felt very nervous.

I did not feel 100% confident, but I did learn them all. At times, during my practicing I was able to play them fairly well.

3. Organists need to be flexible

Over the years, Michael has told me many times that organists need to be flexible and adaptable. I learned this first hand through playing at the church.

My organ at home is a 2 manual organ (meaning it has 2 keyboards). The church’s organ was also a two manual organ. At first, this seemed absolutely wonderful! Then I realized that the only reed stop on the church’s organ on the great manual (bottom keyboard) didn’t work! Apparently, it’s on the list to be hooked up.

Nun bitten wir den Heiligen Geist requires a reed stop and left and right hands are played on different keyboards. At home (and also at Michael’s church for my lessons) I had practiced with a reed stop on the great manual. The church’s organ did have reed stops on the swell (upper) keyboard. I would need to reverse my hand positions. I had to change my muscle memory!

Also, the touch of the pedals at the church was not as light as at my home. In my head, I heard Michael saying “Pretend like your feet have very heavy weights on them”). The force needed to play the pedals was much greater than at home. My legs were sore after a couple of days of practicing at the church!

At home, there are two lights that are built into the organ that shine onto the pedals. The organ at the church didn’t have this feature. This made it more difficult to look down and see which pedals my feet were on.

Michael has emphasized that each organ is going to be a little different and the organist will need to adapt very quickly. I am very thankful that the church was able to give me advance access to the organ.

4. Audiences are okay after all

For the past seven years, my primary audience has been my cats as I practice on my Saville organ in my living room. I am generally very nervous at the start of my organ lessons and was a bit terrified to play in front of a large group.

For my first practice run, my brother’s family stopped by my house to see our new kitten on December 26th. They also agreed to listen to me play the organ. My performance was not great. Instead of feeling more confident from the experience, I felt worse.

The last week of December, I had access to the church in the mornings for practicing. On Friday, my dad, sister, and brother-in-law were able to stop by while I was practicing. When they were seated, I did not really seem them very well from the organ. When I was focusing on the sheet music, I did not notice them that much. I felt much more confident and decided that I could handle an audience!

5. Perfection is not required

I arrived at the church early this morning to run through each piece. This was the best I played most of the pieces. I felt good then.

During the service, my nerves got the better of me during some of my playing. I could feel my heart racing and my teeth were clenched. Was I breathing? I am not sure. I made mistakes in all of the pieces.  No one was upset with me after the service (or if they were, they didn’t mention it). And some people told me that they did not notice any mistakes! They were a forgiving audience.

I’ve uploaded all of the pieces to YouTube to share with those that are interested. Due to my overwhelming fear, I didn’t invite many friends or family to come to the church service. I am very grateful that my sister and 2 friends were there to support me.

The mistakes are very obvious when listening to the them now. Perhaps, while singing people do not notice mistakes as much.

Hearing people sing while I was playing as not like anything else I have ever experienced. I was not sure if I should listen to the singing and found myself over thinking, wondering if I was playing too slow compared to what they were used to.

I had envisioned playing a perfect, playing my best, helping people to lift their voices to the Lord. During my practice sessions at the church, I had changed the stops (how the organ sounds, for the non-organists reading this) for the last verse.

After playing Joy to the World, I realized that changing the stops between verses was going to be too much coordination for me. And I changed the the stops before the third verse and then realized it was not the last verse when I heard people singing.

6. The organist community is very supportive!

Once I found out I was going to play the organ for the service, I asked a couple of questions in a Facebook group for organist. The responses were very positive. I ended up getting too many responses (hundreds) which was very overwhelming. One person was kind and reached out to me in a private message and supported me in that way.

When I shared that I made it through my first service (with mistakes), the response was again very positive and encouraging. Apparently, I am not the first organist to make mistakes.

The primary reason I signed up for organ lessons was to be able to play for a church service. I wanted to be able to help people worship God with their voices.

At my childhood church, Mrs. King played “Praise God From Whom All Blessing Flow” every Sunday after the offering. This is the hymn I remember the most from that church (we moved to a different state when I was almost 13). And here it is about 30 years later, I had the opportunity to play this same hymn after the offering.

It took years of practicing to get to this point and not giving up. I have struggled but thanks to my friend, I finally played for a service. I am not proud of my playing since my nerves got the best of me during much of the service. But I am happy that I went through with it. Next time will be easier!

If you have a dream, I encourage you to keep working at it! With hard work, practice, patient, and perhaps, I little push from others, your dream can come true too!

I am not ready to sign up to be on a substitute organ list yet. The week leading up to the service was exhausting with 2 hours of practice in the mornings at the church and then other hour at home. I had the week off from my day job. If not for the time off, I would not have had sufficient time to be able to prepare and more time would have been ideal to increase my confidence.

I am hoping that this service is a turning point. I proved to myself that I can learn new pieces in weeks (instead of months) when I put in the effort.

The next time I play for a service, I feel it will go better now that I’ve got one service under my belt! I love being an organist!

All pieces played during the service can be viewed from this YouTube playlist.