On February 25, I had another organ lesson. This was my first lesson since I played for a church for the first time back on January 1st. Since I had to learn new pieces for that performance, I did not start focusing on the hymns assigned at my November lesson until mid-January. I took a break after the church performance! 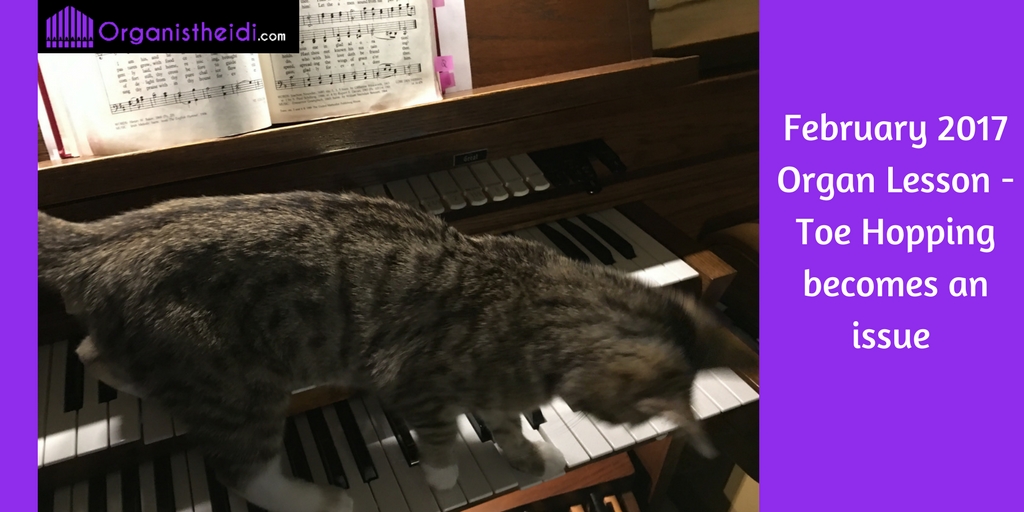 Since my last lesson, I developed a habit of using only my toes when playing hymns! I did not realize I was doing this until Michael asked me about it. He asked me why was I hopping my toes?

I don’t know why I started doing this. Maybe it felt easier at the time. This technique lead to the pedaling in the hymns not being as legato as they should have been. He had me switch to using heels and toes. After I switched the hymns felt easier to play and sounded better too!

I am feeling a bit frustrated with introducing a new issue to correct!

None of my pieces received a passing mark at my lesson. I admit that I did not try my hardest to fix things on my own since my previous lesson. After practicing so much in December, I felt a little burned out. I let myself fall into old habits (not using metronome enough, not counting, etc.) and relied on Michael to point out the issues.

Obviously, this was not the best choice in progressing with the organ! With so many years of practicing, I have the tools to fix issues before lessons!

I played a few of the hymns that I had played for the church service in January. I was not surprised when Michael expressed that they were not in the best shape! He is having me work on Glory Be to God the Father for my next lesson.

The interesting thing is, I have all the tools to fix the issues and didn’t do it before the church service. However with the short time frame I had to learn the hymns, I did the best that I could for the church service. I will need to let it go that my performance was more cringe worthy than perfect.

My performance of each piece can be viewed on YouTube here.

My kitten is helping with practice!

In other news my kitten, Taco, has decided to that he likes to run across the keys when I am practicing! I would love from him to sit calmly on my lap while he plays. Sometimes he also investigates the pedals while I’m playing. We adopted (rescued) him in December.

Do your cats “Help” you practice?