Date nights that include pipe organ concerts are swell! Last weekend Ted and I attended the Paul Jacobs concert at the Peristyle at the Toledo Museum of Art.

The program featured the music of J.S. Bach, Nadia Boulanger, Stanley, Adler, Mozart, and Guilmant. The entire program along with detailed program notes can be found on the Toledo Symphony’s website.

Paul is a fantastic organist. His reputation did not disappoint. The way Paul played the organ seemed like the most natural thing ever. Almost as if the organ was an extension of himself. During the performance he pulled stops as if he had been playing this organ for years. The last piece, “Sonata in D Minor Op. 42” by Alexandre Guilmant was 25 minutes and played from memory!

Before each piece (except for the first one) Paul gave some background on the piece he was about to play. He was funny and connected well with the audience. Before the final piece, his comments included a call to action. He compared the classical music to the art in the museum. His remarks reminded us to enjoy and appreciate music that is hundreds of years old, like many of the pieces in the museum. He encouraged us to attend symphonies and concerts to support the tradition. We should invite and introduce others to pipe organ music. They may like it! 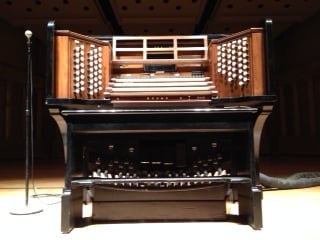 The pipe organ at the Peristyle is a 1926 Skinner Company organ which has been fully restored to its original condition. The restoration was done by A. Thompson Allen Company. The history of the organ, the restoration, and stop list can be found on their website. Paul described this organ as magnificent!

As wonderful as this instrument is, I felt like the pipe divisions are too far apart. In the above picture, the pipes are located to the left and to the right of the stage (they are behind the screens). When the music was played it was very obvious if the pipes were on the left or the right. I found this to be a distraction when music was played that used pipes from both sides. So much so, that I would not recommend the Peristyle for someone’s first organ concert.

Overall, Ted and I both enjoyed the concert. The music was varied and Paul was great. To learn more about Paul Jacobs check out is website: http://www.pauljacobsorgan.com/. To hear and see Paul play watch the video below from his YouTube channel.