In August, I attended 3 concerts – 2 pipe organ and a city band concert. Both pipe organ concerts were part of St. Francis recital series presented by the Ann Arbor AGO chapter. Each Monday evening of August, there was a recital at St. Francis of Assisi Catholic Church in Ann Arbor. Read more about their Létourneau pipe organ here. 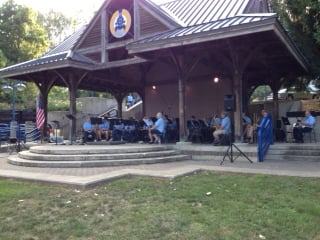 The band concert was the final band concert of the 177th season of the Adrian City Band. This concert is performed at a local park and is free. There is not much seating other then some picnic tables so it’s a bring your own blanket or chair event.

These concerts were all below capacity. I think everyone should attend live concerts once in awhile to feel the music and support musicians. Below, I will discuss who comes to concerts and some ideas for increasing attendance.

Based on the many pipe organ concerts I have attended the audiences have primarily been people over 50, pipe organ students, other organists, members of the host church, and friends or family of the organist. I was a little surprised to find the same demographics at the band concert. Also, at the organ concerts and band concerts, a bus from a retirement home dropped off people.

The band concert at the park had some younger families. There were also people on bikes and a few who brought their dogs. When I saw people in their 30s or younger at the concert, I wondered (as did my mom) if they were there because they knew someone in the city band. Knowing the musician is a great reason to attend a concert as it supports them.

I finally went to the band concert this year because my parents invited me (they are over 50). My husband and I had talked about going to a city band concert many times during the past few years but never went. We receive the schedule for the concert every year from the city along with one of our monthly water bills. That means thousands of other residents of Adrian also received the schedule. However, receiving it doesn’t mean that they read it.

I’ve come up with a list of ideas that could be used to increase attendance. I have not tried any of these, but I find that asking questions and then more questions is a great way to solve our own issues.

What can be done to encourage more to attend? 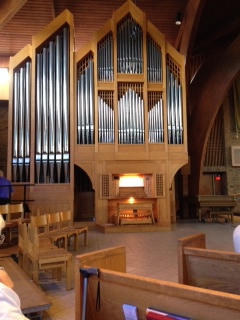 ♩ Give people a reason to attend. If someone knows nothing about the pipe organ, organist, or band, why would they want to attend?

♩  Study what has worked successfully for others. The Spreckels Organ Society reports on their website that over 2,500 attend Monday evening summer concerts.

♩  Does location make a difference? Are outside concerts more accessible? Will people go to a park before a church or auditorium? How can you make your location more inviting for people to attend?

♩  Survey those that attend to find out why they came and how they found out about the concert.

♩  Set small goals that seem possible to achieve. Instead of focusing on increasing attendance by 50%, start with 5%.

♩ Recruit a very dedicated volunteer or committee to implement these ideas or others. Ideas are not enough. Action will be required to increase attendance.

These are some suggestions I thought of. What ideas do you have? Share them below in the comments.

7 ways to find a pipe organ concert in your area