Heidi’s 5 made up rules for organ practice 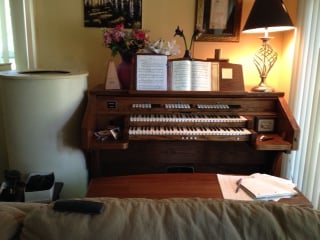 I have been practicing the organ for over four years at home. During this time I have developed some habits and made up rules. My made up rules do have to be logical to anyone else!

Rule #1: Do not turn the organ on during bad weather.

I imagine the organ exploding just as I play a dramatic chord if I were to play during a thunderstorm. That is extreme and probably very unlikely to happen. Perhaps, more logical is my fear of a power surge that could damage my old Saville. It’s plugged into a power strip so it should be safe, right? I’d rather be safe than sorry. Having to find a replacement practice organ makes it not with the risk!

Rule #2: Let the organ warm up while I put on my shoes.

I have a routine for when I begin each practice session. Since my organ is old, I feel like it should warm up before I start playing.  After rolling back the cover, I switch on the organ. Then I turn on the lamp that sits on top of the organ, if the natural light from the windows is low. Next, I put on my organ shoes.  To do this, I swing my legs to the small side of the bench as I keep my shoes on a small table next to the bench. I consider the organ “warmed up” after I have my shoes on!

Rule #3: When the cats are asleep do not use the metronome.

Sometimes the metronome can be annoying! The constant and never ending clicking. When my cats are sleeping nearby sometimes I use them as an excuse to not turn on the metronome. I would not want to hear the metronome if I was sleeping. I figure my cats do not either! I have no evidence that the metronome has every awoken them from sleep. Therefore, this rule is probably really an avoidance habit.

Rule #4: Don’t get off the organ bench until done.

This is because, if I remove my organ shoes to do something else “quick” it increases the chance that I will end organ practice early. It doesn’t take long to put the shoes on or take them off. It’s more that taking of them off usually singles the end of organ practice. I also bring my phones (mobile + land line) to the bench so I can answer the phone or a text without getting off the organ bench.

Sometimes my cat, Lina, will get her claws stuck in the window screen in the kitchen. If this happens while I’m playing the organ, I will get up to help her. Sometimes she can figure it out but I don’t want her to have to hang around in pain when I can see her from the organ bench! Other times, Buster will ask (with a meow) for a drink from the bathroom sink. He likes to drink from the faucet. In the past, he had some health issues from not drinking enough, so sometimes I give in and leave the organ bench to turn the water on for him.

These rules could also be considered habits. Often, our habits take place without even realizing it. In The Power of Habit: Why We Do What We Do in Life and Business

, Charles Duhigg says “This is the real power of habit: the insight that your habits are what you choose them to be.” This book contains interesting stories about habits. The most useful part of the book is the appendix. It gives steps and explains how to identify routines that you’d like to change.

Perhaps, I could be intentional and develop better habits to increase the effectiveness of my practice time with tips from  The Power of Habit: Why We Do What We Do in Life and Business and reading The Bullet Proof Musician blog.

Do you have any made up rules? Have you purposely developed or changed any habits?