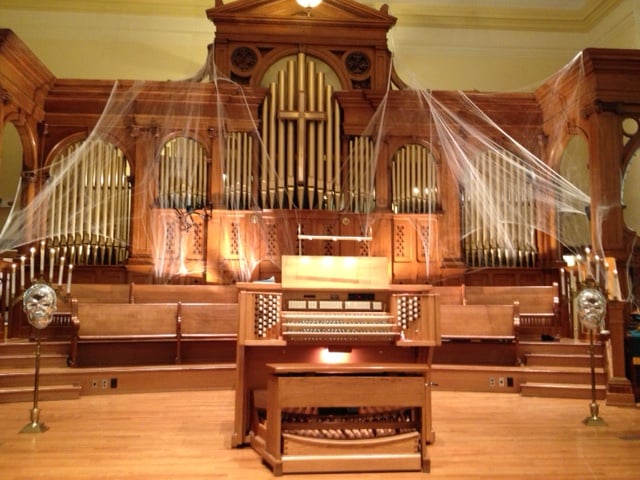 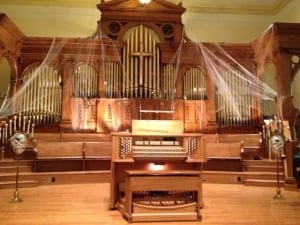 Last Sunday, my husband and I attended the Pipe Organ Spooktacular put on by the Ypsilanti Pipe Organ Festival. There were 10 organists – all students from the University of Michigan.

The concert was centered around Halloween. The pipes were strung with cob webs and a giant spider (the spider is a bit hard to see in the picture). Also, each organist was dressed up in a costume. Many audience members were also dressed up. The costumes were judged during the intermission with the winner announced at the end. It’s been 5 days and I do not remember who won. I should have taken a picture!

The Toot Suite S. 212° by P.D.Q. Bach was entertaining and received some laughs. This was my first time to see this piece performed. It’s a duet with both players sharing the organ bench. The organists interaction with each other makes the piece fun to watch. And perhaps, the only organ concert I’ve been to where laughing was acceptable! I think many in the audience were already familiar with this piece.

There are 3 movements in Toot Suite S. 212°. Each movement was played by 2 different organists. Given that the organists were all wearing customs this made the performance a bit more amusing to watch. 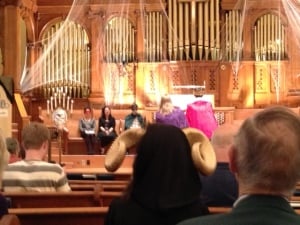 Toot Suite S. 212° being played by 2 organists in costumes!

I admit that this was my first time to encounter P.D.Q. Bach. The biography for P.D.Q. Bach seemed a little fishy in the program. The year of birth and death were in reverse order (1807-1742). And there was a story about P.D.Q. being J.S. Bach’s last offspring who was just given initials instead of a name.

I decided to “Google” P.D.Q. Bach. I discovered that P.D.Q. was made up by Peter Schickele. According to this article, Schickele developed a five-decade-long career, performing the “discovered” works of the “only forgotten son” of the Bach family. P.D.Q. means “pretty darn quick”.

The rest of the program: 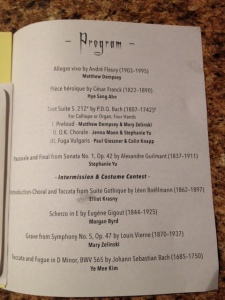 We enjoyed the other pieces in the program too. I’ve thought about playing my organ at home during Trick or Treat on Halloween. However, I do not know how to play any creepy music yet! There were several pieces played that would fit the bill once I learn how to play them.

All of the pieces were well executed and a joy to listen to. The program ended with the well known Toccata and Fugue in D Minor (BWV 565) by J.S. Bach.

Have you or will you be attending a Halloween themed organ concert?

Did you already know about P.D.Q Bach?