Last week, Bill from Midwest Organ Systems visited my home and repaired my Saville organ. As a result of the repairs, I am now able to use the four pre-programmed pistons. 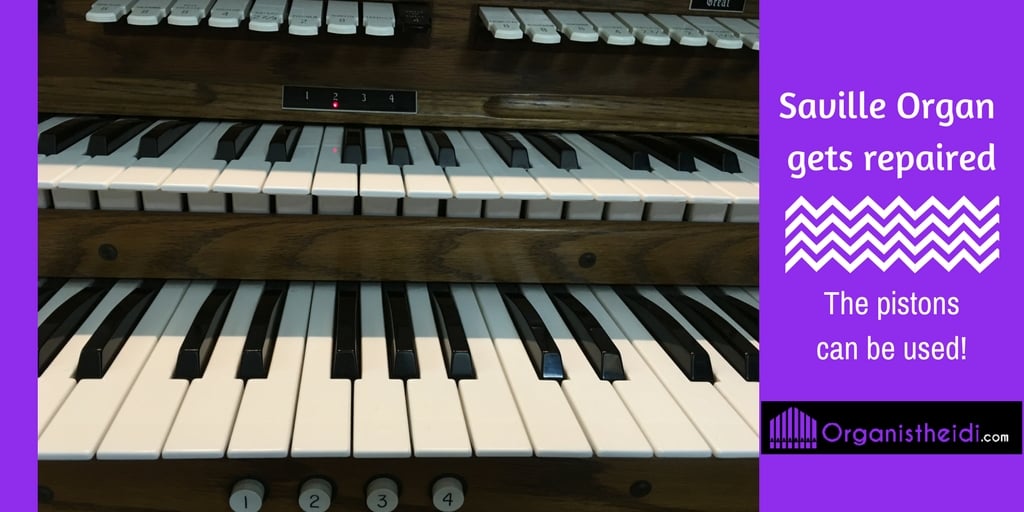 For the non-organists reading this, pushing a piston turns on many stops at one time. In the picture, the pistons are numbered 1 through 4 on the white buttons under the bottom manual (keyboard). In between the two keyboards are a row of numbers with lights under them. A red light indicates that piston is in use.

With this Saville model, only an organ technician can change the stops associated with each position. Once a piston is activated, additional stops can be added.

Due to there always being a problem with the at least one stop included in the piston setup, I haven’t used them in the past. I am excited that the pistons are finally working (I’ve had the organ for over seven years).

Some of the stops were not working properly. One of the pedal keys was out of tune since I’ve had the organ. When the previous repairman was here a few years ago, I forgot to mention this issue to him, so it didn’t get fixed.

Bill fixed all the problems, tuned the organ, and cleaned the key contacts. He also explained in detail how he could install a Hauptwerk Virtual Organ system into the console. When the Saville wears out, I will likely make the switch.

My cat Taco, was the only one of my cats intersted in “helping” Bill.

Seeing inside the organ was neat. There were many very small parts that had worn out.  There were more broken parts than pictured. Bill was prepared and able to replace them all. 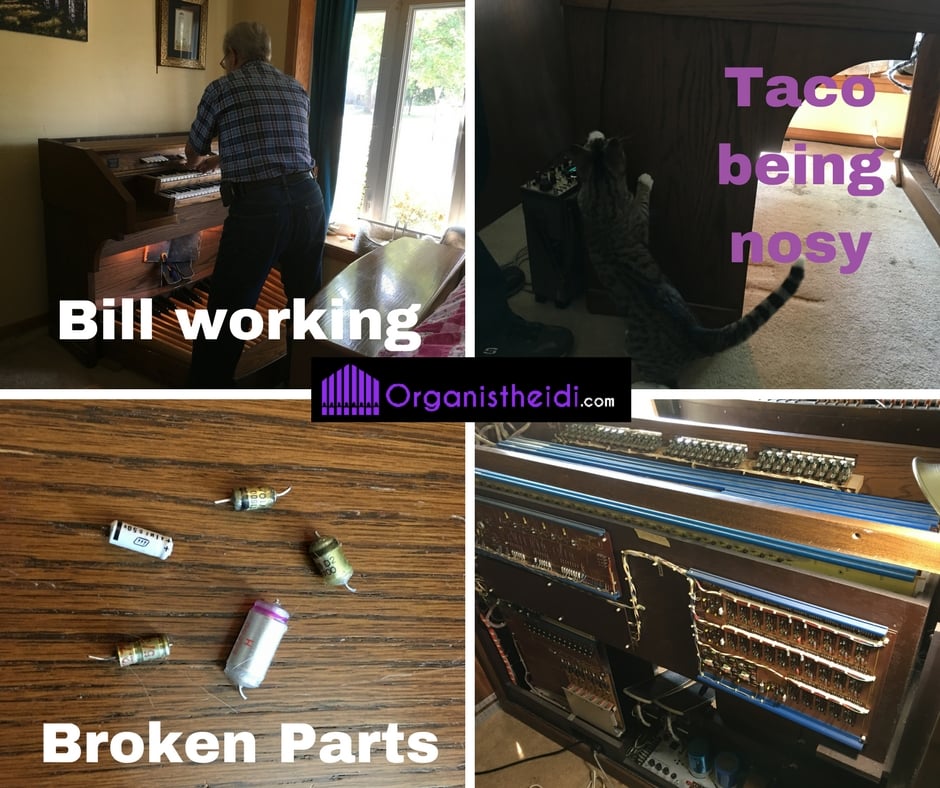 I made a recording of “Crown Him with Many Crowns” using a different position for each stop.

I got a little distracted when my cat jumped on the organ bench during the third verse!

This is the best that my organ has ever sounded. I know it’s old and electronic and doesn’t sound like a pipe organ. However, I love the convenience of being able to practice at home.

I am planning to have my next organ lesson in a few weeks! Due to socialing the feral kittens in my garage (which was very time consuming), I haven’t had a lesson since my lesson in June. We did keep one of the kittens (if you were wondering).

In the picture above that shows Bill working, you can see a board held in place over the expression pedals. This is to keep the cats out! Our two ginger cats still want to play and hide inside as they did when they were kittens and moved into the house in 2014 (they were also rescued from my yard). Violet, their mother, is seen in the video.

If you play an instrument at home, do your cats like to watch?

5 thoughts on “Saville organ gets repaired and the pistons can be used!”