Pipes & Bells An Evening of Organ and Handbell Music 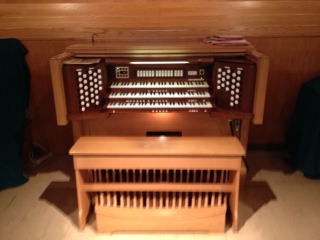 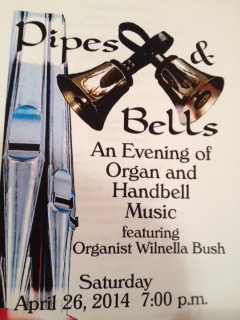 Last Saturday I attended Pipes & Bells An Evening of Organ and Handbell Music featuring Wilnella Bush. This concert was at the Tecumseh United Methodist Church. I found out about this concert via my mom as she read about it in our local paper (thanks Mom!). I am glad that she told me about it as it was an enjoyable and well attended program.

Wilnella Bush has been an organist for 53 years. She spent 32 years teaching and accompanying students at Adrian College. For 13 years before she taught public school musics. She has 3 degrees for the University of Michigan. I would have enjoyed talking to her after the concert, but I did not see her at the reception (she was probably talking to her fans elsewhere!)

Wilnella gave a description of how a pipe organ works before the program started. Also, the pipes for the organ are not usually visible as they are behind a screen. She had the maintenance lights turned on so that we could see the pipes. She described where each division’s pipes are located. If we watched closely, we could see the shutters that cover some of the pipes open and close (the pipes are in a big wood box).

The program was not quite what I expected. With the title “Pipes and Bells” I thought it would be a program of organ and hand bells together. Only one piece: “My Father’s World” used by both. Otherwise, the program alternated with a section of organ music and then pieces by the hand bell choir. The combination of organ and hand bell reminded me of the AGO convention I attended last summer. One of the sessions I attended was a hand bell and organ program where the organ was played the same time as the hand bells.

The pipe organ was made by the Reuter Organ Company in 1967. The organ’s construction was made possible by financial gift from Mr. Ray Herrick. A donation from the Robert Bonner Family made a third manual possible with additional stops being installed in 1976. In 1998 another gift, this time from, Robert Bonner, Jr. resulted in an upgrade to the organ’s action and added 32 levels of memory.

The organ seems to be well maintained and appreciated! There was a reception afterwards. Thinking back on it now, I should have asked around to see if the Bonner family attends the church. Their generosity has allowed many to be blessed by pipe organ music!

Have you attended any pipe organ concerts in your local area recently?