Skip to content
Would you stop for a free concert? Probably not. Does that answer surprise you?
During Lent this year, I attended all but one of the noon organ recitals at First Congregational Church of Ann Arbor. 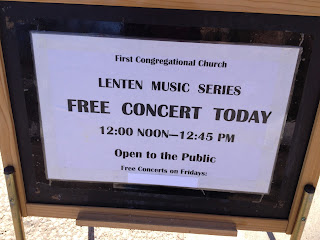 This sign was placed on the sidewalk advertising the free organ concert. The church is in downtown Ann Arbor and there is plenty of foot traffic. I don’t know if any pedestrians stopped in because of this sign but at least they were aware of the opportunity.

A few months ago through organist Katherine Crosier’s blog, I learned of Joshua Bell and the subway experiment. Joshua Bell is a talented violinist who plays to sold out concert halls. The experiment occurred at a subway station in Washington, D.C. in 2007 in coordination with the Washington Post. One morning he played his violin for about 45 minutes. Very few people actually stopped to listen.

The article states “In the three-quarters of an hour that Joshua Bell played, seven people stopped what they were doing to hang around and take in the performance, at least for a minute. Twenty-seven gave money, most of them on the run — for a total of $32 and change. That leaves the 1,070 people who hurried by, oblivious, many only three feet away, few even turning to look. ” I encourage you to read the Washington Post article. Also, check out this video which has over 4 million views. It is less than 3 minutes and shows Joshua at the subway.

Would I have stopped? Probably not. But now, after reading about this experiment, I will be more likely to stop and listen to the music. How about you?
March 2013 Lesson - A lesson in multitasking
Confidence and practice technique - April 2013 Lesson