Last Saturday, I meant Michael for another organ lesson at his church. I learned that I need to be self-aware when I am practicing at home. It’s  possible that I am relearning this again.

My problem is that I think my playing at home sounds okay. Then I go to my lesson, and it isn’t accurate! I also still have the problem of redistributing the tempo. It may come out to the right time in the end, but that doesn’t make it okay!

When I played “Christ is Made the Sure Foundation,” the passing notes were two slow. And then in “Glorious Things of Thee Are Spoken” some of the eight notes were too fast! This is frustrating, of course. And I need to be able to identify these issues at home. 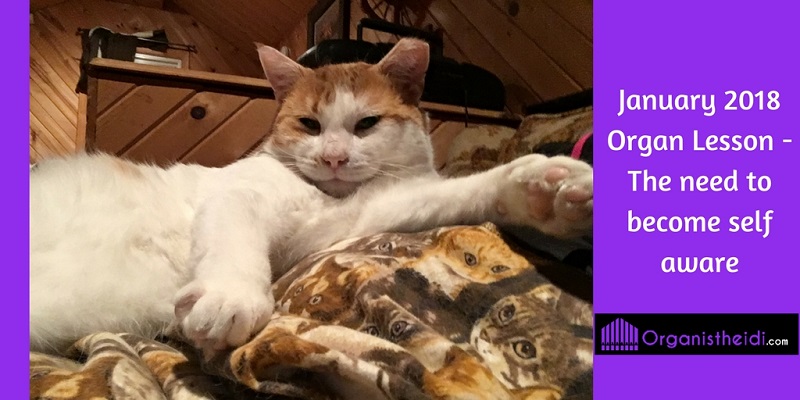 My plan to become more self-aware

I will record myself playing with the metronome clicking. At my previous lesson, I was directed to play the Fugue from “Prelude and Fugue in E Minor” at a slow tempo with the metronome. And Michael said he wanted to hear a recording of it. Well, I practiced this way for two months (I don’t practice every day). But I waited until the night before my lesson to make a recording! It was clear on the recording that I was ahead or behind the metronome some of the time.

Michael’s other suggestion was for me to play with more stops. He said with a fuller sound I might be able to more clearly hear the problems as I am playing. So, I will give that a try. Since we had the issues with the kittens getting inside of the organ, I’ve also had the expression pedals at about the same volume level. It’s a bit of a hassle to remove the piece of wood the prevents the cats from getting inside of the organ, but I should still increase the volume. And, it was hard to hear the pedal notes on the recording.

Other updates for the lesson

I once again failed to play “Glory be to the Father” correctly. That first line is messing with my mind. I will stop playing it for awhile. Also, Nun Bitten Wir was moved to the back burner as it’s about 90% ready to go. Michael asked me to focus on the hymns and fugue until my next lesson.

Also, I was assigned “Let it Breath on Me” which is intimidating because of all the dotted notes which are an ongoing struggle for me. I will conquer them!!!

My latest cat project is fostering a cat that was bitten by another animal. He is in the picture for this post. I took him to the vet when he came to my yard limping. While at the vet he tested positive for feline leukemia virus. So, he’s being kept indoors (so that he doesn’t spread the virus to other outdoor cats) and away from my indoor cats (so they don’t get it) while I find a home for him.

He wasn’t very good at being a stray cat (he was in many cat fights during the fall, even after being neutered). So maybe like me, he struggles with self-awareness!

What tips do you have for discovering issues on your own while practicing?