When someone comes over to my house for the first time when entering the living room they may see this scene:

So what are they?

These are the speakers for my Saville Organ! 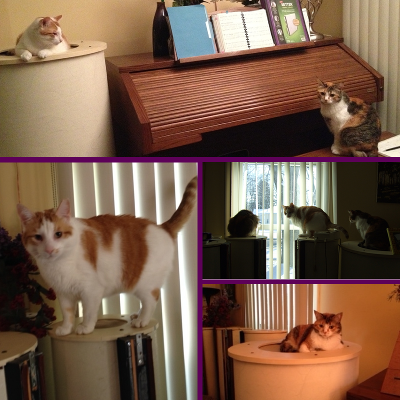 on them while I am practicing or just anytime that they feel like it. Other times they do this to look out the window. There is a bush on the other side of the window and sometimes they want to get a better view of a bird or a squirrel.

You may be wondering, why are the organ speakers so large? These are the original speakers, most likely from the 1970’s. Technology has changed alot since then!

These speakers were once mounted on the wall at a local church. Kilala prefers the largest speaker. The other two cats sat on them more often in the first year or two of having the speakers.

I had to search through a couple of years of photos to find one with Lina on a speaker. Lina (small calico) and Buster (orange/white tabby) are on the speakers in the top photo. In the picture collage Kilala is shown on the bottom right on laying on the largest speaker.

If you have cats or other pets, what in your home, do visitors think are designed for the cats (or other pet) that really servers another [first] purpose?

Would you like to see more posts with my cats? I’ve included “with cats” in my tagline for awhile now and have not written many posts including them! Perhaps June should be cat month.

6 thoughts on “Are those for the cats?”