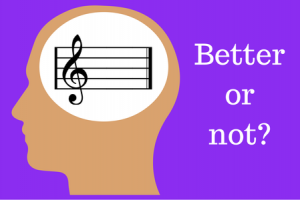 There have been a few pieces that I have learned to play from memory. I did not set out to learn to play them from memory, it just happened. I had to play the piece so many times to learn it that it became ingrained in my  mind.

The sensation of playing from memory is like nothing else. The mind and body take over. I don’t know what to be thinking about or looking at. If I close my eyes I get a little dizzy!

I have been to concert when the entire program was played by memory. Paul Jacobs did this at the Peristyle. The program was excellent. Seeing an organist play from memory for nearly 2 hours is very impressive.

I also attended Daniel Roth’s concert and none of it was played from memory (except the encore piece). The program was also excellent.

Is the music better when played from memory?

To the untrained ear, my answer is no, it is not better. The quality of the musician is what make the difference. If I were to listen to a concert with my eyes closed, I would not be able to distinguish if the organist was playing from memory. The only exception might be if I heard a page being turned!

While researching this question, I discovered Caroline Wright’s blog Memorising Music. Caroline’s site gives the basics for memorizing music and also the pros and cons of playing from memory. I am very intrigued by her site. So much so that I decided to contact Caroline.

I asked Caroline “Would you be able to tell if the musician was playing from memory if your eyes were closed?” Here is her response:

Although I like the premise of your question, If I’m honest, I don’t think that music played from memory necessarily sounds better than music played with the score. The level of preparation and musicianship is key. If someone uses the score because they don’t really know the notes, then unfortunately I think that takes a lot away from the music. Equally, if someone plays from memory with lots of wrong notes that disrupt the flow of the music, then that is also detrimental to the performance.

Personally, I much prefer to watch a soloist playing without a score, but I have heard many magnificent and expressive performances from musicians using the score. (I also prefer to play without a score, though it can make the performance feel more like a high-wire act!) I think what matters is the performer’s ability to communicate the both composer’s and their own musical ideas. I doubt I could tell the difference between a well prepared musician playing from memory versus the score with my eyes closed, but it’s certainly an experiment I’d like to try!

Note, that I wrote my opinion on the matter before I contacted Caroline. She and I seem to agree how well the music sounds depends on the musician and their ability!

Caroline referred me to another resource: Musical Performance: A Guide to Understanding

Aaron Williamon describes an interesting experiment where audiences apparently rated memorised performances higher, as being more expressive and communicative.  I’m not able to access the study so it is hard to know how large, well controlled or reproducible it was, but the results provide at least some tantalising evidence to support the idea that playing from memory improves the performance. Which is definitely something most ardent memorisors like me believe!

What do you think?

9 thoughts on “Is the music better when played from memory?”