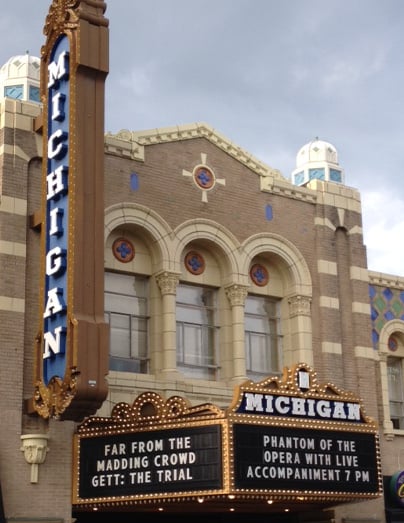 Last Sunday, my husband and I stepped into history. We watched the 1929 restored version of The Phantom of the Opera at the Michigan Theater in Ann Arbor, MI.

This same movie was shown in 1930 at the Michigan Theater and the same organ was played (the organist was not the same).

Sunday’s organist was Andrew Rogers. Andrew created his own score for the movie making this showing unique. Andrew played The Barton Organ which has recently been restored.

This was our first time to watch a silent movie with live organ. I assumed beforehand that there would be subtitles. In reality, the text that was displayed used the entire screen. The letters written by the Phantom were displayed so we could read them. All dialogue was displayed a sentence or two at time, and we were given plenty of time to read it.

The organ was played for the entire length of the movie, about 1 hour and 35 minutes. While waiting for the movie to being, there were not any previews or advertisements. We were treated to Andrew playing several pieces from memory.

Here are 4 reasons to watch a silent movie with live organ:

1. Experience a part of movie history. The first movies were silent with some being accompanied by a theatre organ (or other musicians ensembles or piano). Attend a silent movie with live organ to gain first hand knowledge of early movies.

2. Appreciate the skill of the organist and hear the awesomeness of a well played organ. Be awed by what an organist can do to create music that will help you feel the emotion of the movie.

Theatre pipe organs often have other instruments connected to them giving the organist a wide range of choices for sound effects. The American Theatre Organ Society has a great article explaining “What is a theatre organ?” that you can read for more information.

3. Do something you’ve never done before. Seeing a silent movie with live organ could be added to your life goals (bucket list). Seek out a location and a movie. Make it an adventure.

Consider making it a destination on your next vacation if there is not a theater near you. It’s an experience that will not soon be forgotten.

4. Silent movies are better with organ! Perhaps, you’ve watched a silent movie on DVD in the comfort of your own home without music. Live organ takes silent movies to the next level! There is a reason that current movies still include music. Music adds an element that cannot be accomplished with words and/or pictures.

The American Theatre Organ Society lists the location of theatre organs on there “Where Are They Now” page. Use their list to find an organ still in a theater, then check the theater’s website for silent movie showings with organ.

Have you watched a silent movie with live organ? What did you think?