May 2015 Lesson - Home practice vs. performance

May 2015 Lesson – Home practice vs. performance 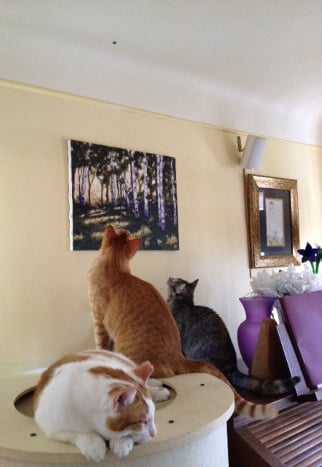 Two of the cats use the organ console and speaker to get a closer look at the spider on the ceiling. Buster apparently didn’t notice it.

On May 16th, I met with Michael at his church for an organ lesson. We realized that I’m not always able to play at my lesson as well as I do at home.

I started the lesson with the Bach fugue from Prelude and Fugue in F Major (BWV 556).  I’ve been working on it for over a year. I felt confident that I would play it well enough to get it checked off my assignment list based on my progress at home.

Well, my performance did not go as planned! While better than my previous lesson, my tempo was still uneven in some sections. And I had a complete breakdown and stopped completely in the middle. I may have been thinking too much about playing it without messing up.

Michael had me play it again from start to finish, this time recording it on my phone. Even if played a wrong note or struggled with tempo I was instructed to not stop and keep going to the end.

The recording revealed my old tempo issue of speeding up when easier and slowing down when harder. I could clearly hear the issues in the recording.

I had made a recording at home during the week prior to my lesson. We listened to that recording together. My tempo was much more consistent and even at home! On scale from 1 to 10 where 1 is best the tempo was a 2 at home. My performance at the lesson was rated as a 6. That is a huge difference.

I need to be able to play consistently and accurately on any organ, not just my Saville organ at home. Being nervous probably did not help and the keys on my organ at home making a clicking noise, so that may be helping me at home.

Perhaps, I should reach out to some churches (and maybe funeral homes) in my area to see if they would let my practice on their organ once a week. This would give me experience with playing on more organ consoles than only mine and at Michael’s church.

I will keeping working on the fugue for one more lesson. Then I will be assigned another yet to be named fugue. Since fugues seem to be a bit more difficult for me grasp than other types of pieces, I must keep playing them to conquer them!

Until my next lesson, I am not to start any piece at the beginning. When Michael asked me to start the fugue in the middle, I had trouble with the tempo. I eased into it, instead of starting with the correct tempo. Michael asked if I always start at the beginning. I confessed that I did. This may seem like a small thing but It feels like a huge shift in my mind to change my routine.

I was able to play “Arise, Shine Out, Your Light Has Come” successfully during the lesson and this hymn was taken off my assignment list. “God Be With You till We Meet Again” was added.

Do you have any tips for planning at the same level at a performance as at home?

4 reasons to watch a silent movie with live organ
Is subdividing the answer to my tempo problems? - June 2015 Lesson

How to find a home practice organ

The Benefits of Weekly Piano Lessons

August 2018: My first piano and organ lesson with my new teacher

[…] I have mentioned previously, I have struggled with having a consistent tempo while playing the fugue from Prelude and Fugue in […]

I second all the advice given! Having a few minutes of warm-up is necessary for me. You could also consider taking your teacher out for lunch or dinner; I’ve found the better I know them, the less lesson-day jitters I have 🙂

The best tip is to play on different organs. Every one has different action, and before attempting a challenging piece it’s good to play a warm up song you already know from memory. This way you can learn how to deal with the different action and ambience.

Thanks God the most complex pieces for Sacred Organ are fugues. Try to play Brazilian pieces on it, and you’ll discover a whole new world of odd-placed left-hand figures that will have you sweating bullets: http://www.youtube.com/watch?v=MVCKPP3i2bQ

thanks for sharing the video!

I would definitely recommend trying to find more places to practice. Every organ, the space it’s in, and other aspects are different every place you go–and anything different from your usually practice setting can throw you off a little and make you nervous. Usually I have some access to three other local pipe organs besides the one I play on Sundays (although only two right now due to some renovation projects at one of the churches). Besides requiring additional focus due to a different “environment,” playing other organs allows you to experiment with different registrations as well as determining how to adjust to playing in different acoustics and dealing with mechanical differences between instruments (i.e. how “sensitive” or “stiff” the manuals and/or pedal board are).

Thanks Rachel! Now the hard part will be having the courage to reach out to churches to see if they will let me practice occasionally on their organ.

A few different things have helped me with nervousness. One is to find something to focus on when I play – thinking of the piece as like a song or story and being focused on telling the story or “singing” the piece as I play. For me it’s important to incorporate that focus into my practice when I am alone. That way when others are around – whether a teacher or a congregation, my focus automatically shifts off of those people because I have trained myself to focus on something else. For hymn playing, I pretend that there is a congregation singing with me. It’s kind of silly, but just pretending that I am a super confident and skilled organist can make a big improvement in my playing.

I don’t know if you can do this, but another thing that I’ve found really helpful is to practice as much as possible on the instrument where I will have to perform (or have a lesson). If I spend a lot of time practicing alone in a space I perform in, it is easier to feel like I am still there alone, even when other people are there. It is harder to make myself calm in a space where I have only played in stressful/nerve wracking situations.

Thank you for the advice Jane! I can try focusing on a story or something else when I practice. The organ for my lessons is currently a hour from my home, so I’m not likely to get any practice time in there.

No tip but you get an A+ for determination.
I was always extra nervous at my piano lessons and could play the piece better at home.